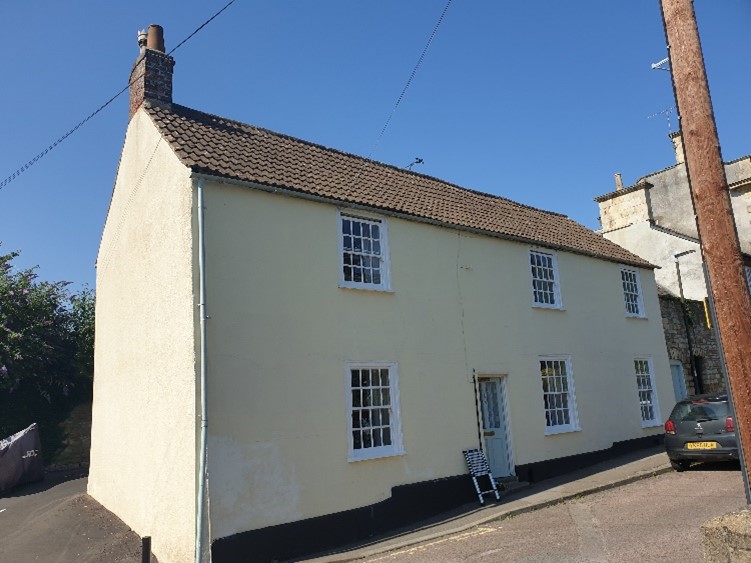 The walls are bulging!

Within my role as a Residential Building Surveyor, I cover Gloucestershire and the Cotswolds. I therefore regularly come across vernacular buildings which are of solid stone wall construction. Recently while surveying I encountered a listed property with significant bulging to all four walls. Assessment of the issue needs to be carefully considered prior to recommending remedial action to the client.

The property in question was constructed circa 1800 in a small Cotswolds town. The external walls have been rendered and majority of the internal walls have been plastered. It was therefore quite tricky to assess what the make-up of the walls. Often clues are available within the roof. Upon inspecting the roof void, I noted that the flank walls are of random rubble stone construction. I also noted that the walls are 450mm thick, although this differs in places, further indicating solid stone construction.

The external render to the wall surfaces has been relatively recently renewed. As a surveyor this always makes you suspicious. Cracking had already begun to affect the render to the majority of the elevations, indicating ongoing movement within the walls.

Bulging within external walls of a building can be caused by several issues from the roof spread or deflection within the floor joists to defective drainage.

However, we ruled several of these issues out as the bulging is affecting walls to all elevations.

All rubble walls are built as two halves, with the two faces being built as flush as possible and with the irregularities of the stones meeting in the middle of the wall. Gaps between the stones are filled with smaller stones and copious quantities of mortar. Continuous vertical joints are avoided as much as possible to bond the wall up to its height. In order to bond the two halves of the wall together through its thickness, ‘through’ stones, which run through the thickness of the wall from face to face, and ‘bonding’ stones running through at least two-thirds of the thickness of the wall are required at regular intervals. Without these, the two halves of the wall can act independently. Random rubble is not ideal at the most structurally critical areas of the stone walls.

In contrast, modern properties of traditional construction are built with cavity walls. This is essentially a brick or stone wall (outer skin) with a void and then an internal skin off masonry, usually concrete block. The outer protective skin is separated from the internal load-bearing skin by a cavity. The internal skin is nowadays usually constructed in blockwork and the two elements are tied together by wall ties.

When cavity wall ties begin to fail you would expect to see horizontal cracking every three courses of masonry. This would be more prevalent on the south westerly facing elevations as these are more exposed to poor weather conditions. The cracking is usually easier to see when they walls have been rendered. The cracking will also likely be wider at the top of the walls than it is at the bottom due to less load keeping the masonry together. The cracking occurs due to expansion within wall ties due to corrosion.

Anyway, I digress. My point is that both solid walls and cavity walls can fail if the inner and outer skins are not bonded together correctly, or the bonding fails.

With regards to the subject property, this appears to be the case. The walls were found to be bulging both internally and externally, indicating that a void in the centre of the wall is increasing due to a lack of bonding stones and through stones.

The render has most likely been applied to the external wall in order to try to add additional support to the wall and cover deterioration to the masonry beneath. However, as the render cracks it will allow moisture to penetrate the wall and increase the rate at which it deteriorates.

Our advice to the client was therefore to appoint a stone masonry contractor to remove sections of the render and sections of the stonewall so that the void between the inner and outer skins of the wall can be inspected. We are hopeful that bonding stones and through stones can be retrospectively installed at various points in order to sufficiently tie the walls back together and prevent further movement in the future. Alternatively metal ties can be installed, and this will most likely be cheaper. We would also recommend that the client has the property re-rendered using a lime based render which is both breathable and flexible and should prevent cracking from returning. All our Level 3 Building Survey reports come with advice and costings for repairs to any defects we find with a property during a survey.