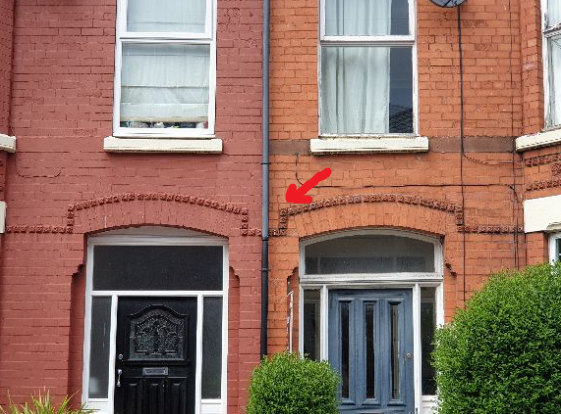 The importance of a PCA Timber Inspection

Inspection took place on a dry day in May 2021, in Liverpool.

I was waiting outside the property for my mentor to arrive with the keys to accompany the inspection, and noted significant distortion to the front elevation; the windows and doors were sloping, the front step was sloping, and there was cracking to the brickwork. Desktop research conducted prior to the inspection, and general knowledge from working in the area, suggested that this could be from local tunnelling or underground watercourses.

Suspended timber floors in properties of this age can often be found to be affected by rot and/or woodworm infestation once floor coverings are lifted, due to reduced levels of ventilation and elevated levels of dampness. Use of an endoscope (inspection camera) revealed significant white staining to the sub-floor timbers, areas of rot and deterioration, and vegetation growing through the subfloor. All of which are a further indication of likely deterioration to the subfloor timbers, and such vegetation can hold moisture, in term leading to increased dampness in the areas, resulting in an increased risk of rot and woodworm.

The client was advised that it is recommended that an inspection of the subfloor void is carried out by a PCA registered timber treatment contractor as part of their plan for maintenance, which will require removal of some floor boards to allow a thorough inspection. Within the report, the client was also advised that a provision should be made for replacing any affected timber, as and where necessary.

The external distortion could also be an indication of deterioration to the subfloor timbers, however until the floors are subject to an inspection by a PCA registered timber specialist, this cannot be proven in its entirety. There is also a mature privet hedge in front of the property, less than 1m from the front elevation wall. Non-mature plants should not be allowed to grow any taller than their distance from the property, to help protect the foundations, as mature bushes remove extra water from the ground as they grow, which can destabilise the ground beneath the foundations and cause movement and/or affect drainage. Initially we suspected this distortion to the property may be due to an underground water course, which are common throughout Liverpool, or the Williamson Tunnels. However, the distortion appears to be isolated to the subject, as all other adjoining properties on the road appear level and in-line, suggesting the cause is more likely to be either or both; deterioration to the subfloor timbers, and the mature privet hedge.

In this instance, the endoscope highlighted that our suspicions were correct, that the subfloors were deteriorating and will require work. However, a PCA registered contractor can lift parts of the floor to reveal the full severity of the issue and report on the works required. Such defects were something I had never seen before, but something I had only read about within course notes and books. I am cautious now to ensure to check floors for slopes using a spirit level, particularly when they are constructed of timber.

To get an instant online quote for your local surveyor simply click here and complete our 30 second form.