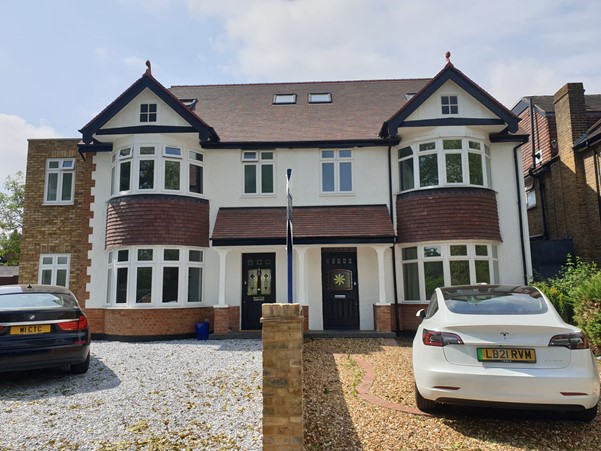 Getting ready for the great British summer after a wet spring, it was a sunny Thursday June 2021 where I was allocated to carry out a Building Survey in Hampton, London. I collected the keys from the estate agent and an envelope was handed to me with the keys and I made my way to the property.

Upon arriving at the property, the kerb appeal of the property was found to be appealing for a potential buyer as the property had undergone external renovations. I parked my car and made my way inside the property to carry out a risk assessment for my surveying routine where I walked around the property to familiarise myself with where the rooms are allocated. The property was a semi-detached 1920s construction with the ground floor consisting of the hallway, living room, open plan kitchen and a cloakroom. The first floor rooms consisted of the front elevation double room, front elevation bathroom, rear elevation double room and a rear elevation singe room. The second floor was a loft conversion with the front elevation shower room and a rear elevation bedroom. After walking around I went back to my car and collected my inspection equipment and my telescopic ladder which I needed to inspect the flat floor of the kitchen extension.

During my survey inspection I started to note discrepancy of the waste pipe where I could not locate externally. The building was not a conventional 1920s building where the plumbing is configured to how it should be. As the building was constructed approximately 100 years ago, the technology and science of construction respectfully are not as advanced as modern-day buildings. A conventional 1920s building should consist of the soil vent pipe and the grey waster waste pipes on the external walls where the bathroom should be located either on the front or rear elevation of the building depending on where the main sewage line is located.  I was expecting the pipes to be at the rear and at first assumed the waste drainage to discharge to the rear elevation. However, the plumbing of the building has been significantly altered where I was not able to find the external waste pipes which also had me questioning the internal layout of the pipes. So I began what I call ‘Nosey Mode’.

The purpose of the investigation was to find out why the plumbing was altered when in fact the majority of the buildings I have inspected do not have a problem with how conventional waste pipes are configured. The first objective was to find where the waste drainage is discharging to. I confirmed this by locating where the bathroom, cloakroom and shower room at the front elevation. I then stepped outside and spent more time locating the inspection chamber but was not able to find the cover, so I decided to look at the neighbouring properties. A detached property located on the left elevation of the building had their inspection chamber to the front and their waste pipes located on their left elevation wall. I looked at the neighbouring attached building’s waste pipes and located the pipes on their right elevation wall however the building had undergone alterations where a side extension has been added. This confirmed that the main drainage is on the front elevation however I was not satisfied with the subject building’s plumbing pipe configuration. At this point, I was left confused and feeling that I needed to solve this mystery.

At this point, I was left confused and feeling that I needed to solve this mystery even more.

I turned around and looked at the pavement to see if both driveways have been adopted to the properties and noted the neighbouring property driveway partially leading to the subject property and there was a brick boundary wall in-between. Then a spark of conclusion ignited my eyebrows to the sky, and I concluded the subject the property was an original detached building, and the neighbouring building is an extension added then converted into a separate single dwelling.

At this point, I was satisfied, feeling closure to the plumbing mystery.

I went to the rear elevation and observed the brickwork to both properties and found the subject property to be a solid wall and the neighbouring property to be a cavity wall confirms different ages of construction. The drainage of the subject property discharged into the neighbouring property drainage system and is a shared drainage system. Have all these discoveries lead me to carry out further desktop study by checking the local planning permission website confirming the conversion from a detached property to a pair of semi-detached houses. I referred the checks with the legal adviser ensuring that all alterations comply with building regulation with supporting documentation and a Professional Consultants Certificate available for the works.

I then carried out a further inspection of the alterations and finished my inspection and headed to my car. I put my inspection gear away and sat in and looked at the envelope provided by the estate agent. I opened the envelope and pulled out two sales particulars of the old detached property and the next subject property details. I laughed at myself, ‘If only I looked in the envelope before my inspection’. If a property has undergone conversion and extensions of some sort then we would always recommend a Level 3 Building Survey which you can book here.